(July 3, 2022 / JNS) The oil painting on the wall is haunting. A man in the foreground appears to howl with rage as a river of blood from a corpse in shrouds runs down a valley. The black Xs throughout represent other deceased persons. Yet the sky in the background is a soothing blue, buffered on one side by lush forest and on the other by an unassuming village. But it’s hard to focus on beauty given the full picture.

The painting, titled ‘Valley of Death – Wadi Haramiya’, is the work of Marc Provisor, an Israeli artist, who put his artistic career on hold more than 30 years ago in order to work in the field of wrestling. against terrorism. In that capacity, he served as director of security for the Shiloh bloc of Jewish communities and, most recently, director of security projects for the One Israel Fund organization.

Provisor slowly leaves the security field and returns to the art world. Many of his creations are on display at an exhibition called “Turn Us Back” at the Ancient Shiloh Tourism and Heritage Center in the Binyamin region of southern Samaria. The exhibition marks Provisor’s renewed interest in his true passion.

The “Valley of Death” graphic painting “helped me come out of a trauma I was going through,” Provisor told JNS on the show. He was referring to a 2002 incident in which a heavily armed Arab terrorist carried out a sniper attack in the Wadi Haramiya valley in Binyamin, killing 10 Israelis, including seven soldiers and three civilians. Twelve others were injured. Provisor himself came under fire after being called to the scene as part of an operation to neutralize the terrorist.

The terrorist managed to escape but was eventually captured by Israeli security forces. The event shocked Israel collectively and was devastating to the Provisor personally.

“I was driving down the road and starting to relive the tension of the attack, and it was getting too much,” he said. After consulting with a friend who was a mental health professional and reading books on post-traumatic stress disorder, Provisor decided to return to his studio.

“It helped me find the release I needed,” he said, “and the next day when I finished this painting, the tension was gone. It helped me reconnect to the art world.

Many of Provisor’s other works featured in the exhibition shed light on the realities that Israelis under the threat of terrorism face on a daily basis, whether on the roads of Judea and Samaria, in towns and villages adjacent to the Strip. from Gaza, or along the northern borders with Lebanon and Syria.

A painting, for example, titled “Southern Red,” depicts the situation in southern Israel from the perspective of the Provisor. The work was carried out using pieces of Kassam rockets fired by terrorists in Gaza at Israeli communities.

This is in stark contrast to many of Provisor’s other paintings depicting scenic landscapes across Israel..

“I’m not trying to push a political agenda,” he said. “I just paint what I see and how I see it with my travels and some of the beautiful places I go.” However, Provisor laments the fact that as a Jew living in the Jewish state, there are places that are off-limits to him because they are controlled by the Palestinian Authority.

His painting “Red Signs” depicts the large red warning signs at the entrances to parts of Judea and Samaria – a territory commonly referred to as the West Bank – under full Palestinian administrative and security control. Israelis are barred from entering these places, known collectively as Area A.

Provisor argues that while technically “Israelis” are banned from Area A, Arab Israelis can enter. 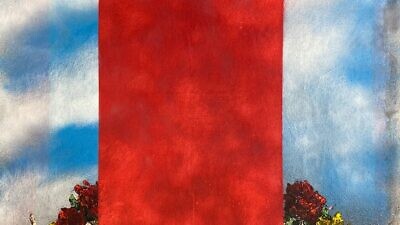 Just below “Red Signs” is another painting, titled “Looking East”, of a beautiful desert landscape. “Because of these [red] signs that I’m upset that we as Jews are prevented from seeing so much beauty, and that bothers me,” Provisor said.

Provisor is also angered by Israel’s recent decision to join the European Union’s “Creative Europe” program which promotes cultural cooperation between artists from Israel and the European Union. The agreement excludes Israeli artists living in Judea and Samaria, who therefore cannot access funding otherwise made available through the joint initiative.

“I’m an Israeli citizen, I’ve served in the army, my children have served, I pay my taxes, but the fact that…artists living on the other side of the Green Line are excluded from the program, it’s a personal offence,” Provisor said. ” I don t appreciate. It’s supposed to be a government for everyone, so I guess I’m not “everyone”.

He believes that the decision to go ahead with the deal “has given [the Boycott, Divestment, Sanctions movement] a seal of approval. 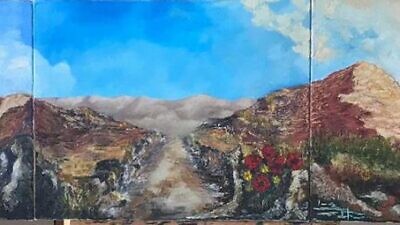 Accordingly, Provisor aims to develop programs that support artists from Judea and Samaria.

“There are a lot of great artists here, and I want to help expose them – in a positive way – to bring a different perspective,” he told JNS.

“People think Judea and Samaria is always about conflict and violence,” he continued, “but there are many talented artists painting the beauty of this region, and we hope to have many more exhibits. and expand opportunities for these artists to have their work exhibited.

While Provisor’s primary focus is currently producing his own art, he is still involved in the security field. This includes sharing his counter-terrorism knowledge with his son, who takes his father’s place in doing a lot of field assessment work. In other words, to design solutions that keep communities in Judea and Samaria safe.

Provisor said he is enjoying success in the art world, with his paintings exhibited in various exhibitions in Europe and the United States. With the extra attention, he sold some of his works.

“After all this time,” Provisor said, “I’m starting to realize the dream.”