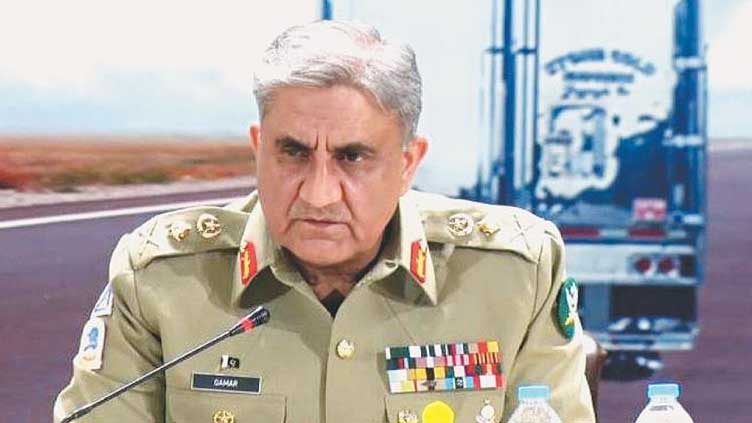 RAWALPINDI (Dunya News) – Army Chief General Qamar Javed Bajwa has appreciated the Corps of Engineers for their outstanding contributions during various operations especially in the fight against terrorism.

He expressed his appreciation during his visit to Risalpur and Nowshehra on Thursday.

Upon his arrival at Risalpur Military College of Engineering, General Bajwa laid a wreath at Shahuada’s monument and offered Fateha.

He visited MCE and was briefed on the training modules and various training facilities at MCE including the Counter IED Explosive Ordnance School, Combat and Civil Engineering Wings.

The Army Chief was informed that CEMS, a state-of-the-art training facility, contributes phenomenally to the training of Pakistan Army, Pakistan Air Force, Navy Pakistani and police as well as officials from friendly countries.

This training was key to successful operations during the War on Terror. It enabled manpower to search and identify IEDs planted by terrorists and clear and dismantle terrorist infrastructure and area clearance providing force protection.

General Bajwa also visited the structural laboratory of the MCE designed to test and verify various standards of huge infrastructures. He also met with the champion team of the Corps of Engineers of the PACES international competition and praised their professionalism and skills.

General Bajwa, on the occasion, inaugurated a newly built training complex for the VT4 tank which will provide a state-of-the-art training system to train officers and men of the armored corps on one of the war fighting machines most powerful and most modern tanks, the VT-4, in the Pakistani army.

He also inaugurated the Center of Excellence for Mechanized Warfare Training which will enhance the technical and tactical capability of students.

The Army Chief praised the School of Armor and Mechanized Warfare for keeping abreast of future emerging challenges on the battlefield and preparing officers and men to overcome new threats.