For this reason, wrote researchers at the Institute for National Security Studies (INSS) in Tel Aviv, Israel fails to “maximize its security, economic and technological potential in its response to political, security and internal”.

The authors of the Strategic Study for Israel 2022 decried an erosion of trust in Israeli institutions, alongside the rise of extremism in the country. They specifically identified the weakness of the Israeli police force and the spread of largely ungoverned areas in Israel, including among the Bedouins of the Negev.

“Meanwhile, there are gaps in preparedness for multi-pronged, high casualty war scenarios, or violent incidents involving Jews and Arabs,” the report said. “The consequences of these weaknesses affect responses to other national security challenges.”

The INSS study identified Iran and the Palestinians as the other main threats.

The authors argued that Iran, Israel’s most serious external threat, currently has the capabilities to become a nuclear weapon within weeks, although it has yet to make that decision.

At the same time, Israel is in a “strategic impasse” over Iran, with no apparent good option. A partial deal between Iran and the P5+1 powers during the ongoing talks in Vienna would leave Israel facing Iranian proxies and the possibility of an Iranian nuclear weapon in years to come, while a break talks would allow Iran to continue moving towards nuclear weapons capability. .

Supporters of Yemen’s Iran-backed Houthi rebels carry a fake rocket as they demonstrate in the capital Sanaa to denounce a reported airstrike by the Saudi-led coalition on a prison in the country’s north held by the rebels, January 21, 2022. (Mohammed Huwais / AFP)

“However,” said the investigation, “opposition to an arrangement between the powers and Iran, centered on a freeze of the nuclear program, will leave Israel isolated with only the military option to prevent Iran from acquiring nuclear weapons”.

Israel cannot handle threats emanating from Iran alone – including its precision missile project and its attempt to encircle Israel with proxy threats – the authors stressed, and must therefore further strengthen coordination with the United States.

The INSS report also stressed that Israel cannot treat the unresolved Palestinian conflict as a “secondary arena”, as evidenced by the 11-day conflict in Gaza with Hamas and Islamic Jihad in May 2021. Meanwhile, the West Bank “is approaching a boiling point due to the PA’s weakness in the face of united opposition from various factions and street gangs.

The Palestinian Authority is weakened and could cease to function, the authors warn, as young Palestinians increasingly desire a one-state solution. 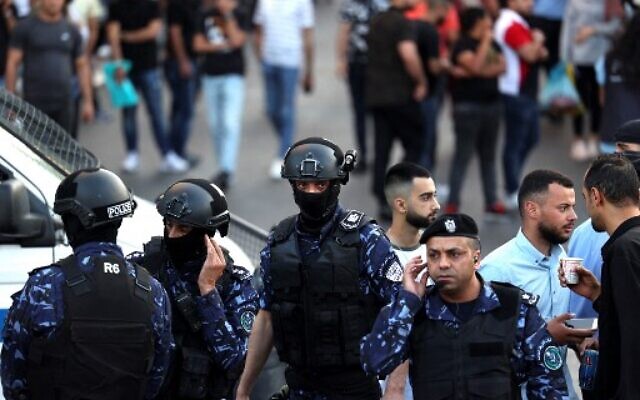 Palestinian police prevent protesters from gathering in the West Bank city of Ramallah ahead of a planned demonstration against the Palestinian Authority on July 5, 2021 (Photo by ABBAS MOMANI / AFP)

Although it cooperates with Israel on security issues, the PA is pushing a dangerous international legal offensive against Israel, which could lead to Israel being deemed an apartheid state, according to the report.

The investigation presented ten policy recommendations, including preparing a credible military option against Iran’s nuclear program in coordination with the United States; strengthen the PA and improve the quality of life of the Palestinians; pursuing economic development in exchange for security guarantees in Gaza; investing more in Israel’s technological prowess as a way to improve its global status; and the establishment of mechanisms to deal with crime in Arab society and restore governance throughout the country.

“Today there is an emerging regional understanding that the future of the Middle East is a future of cooperation. In the face of the Iranian threat and its dangerous proxies in the region, we must cooperate with our friends,” said Herzog in response to the INSS survey. 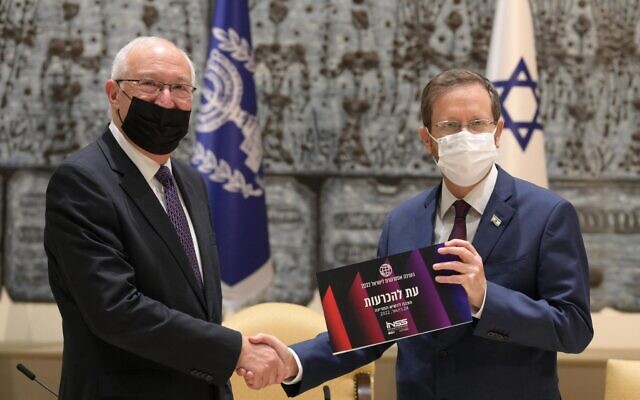 “Israel’s security is closely linked to its national resilience, to our ability to manage the deepest disagreements, without giving up our faith in ourselves,” he continued. “We have the power to live together and act as one people. Bridging divides, including political ones, is perhaps the most important step in maintaining Israel’s security, stability and prosperity.

During a global pandemic, a small country produces research that helps guide health policy around the world. How effective are COVID-19 vaccines? After the first two injections, does a third dose help? What about a fourth?

When The Times of Israel began covering COVID-19, we had no idea our little beat would become such a central part of world history. Who could have known that Israel would be the first at almost every step in the history of vaccination – and generate the research so urgently needed today?

Our team covered this story with the rigor and precision that characterizes Times of Israel reporting on all topics. If it is important to you that this type of media organization exists and thrives, I urge you to support our work. Will you join the Times of Israel community today?

Are you serious. We appreciate that!

We’re really glad you read X Articles from The Times of Israel over the past month.

That’s why we come to work every day – to provide discerning readers like you with unmissable coverage of Israel and the Jewish world.

So now we have a request. Unlike other media, we don’t have a paywall in place. But since the journalism we do is expensive, we invite readers to whom The Times of Israel has become important to help support our work by joining The Times of Israel community.

For just $6 a month, you can help support our quality journalism while benefiting from The Times of Israel WITHOUT ADVERTISINGas well as access to exclusive content available only to members of the Times of Israel community.