i really mean “YAY at least they talk” but I won’t go any further. I know this is going to be a looooooonnnnggggg chicken game.

On December 1, 2021, the Players Association and MLB had a SEVEN minute break which obviously led to the lockout. A week ago today, MLB made its first proposal and the two sides talked for about an hour, but no progress was made. Now, MLBPA is preparing a counter-offer that could be made any day. Jon Heyman tweeted it yesterday. 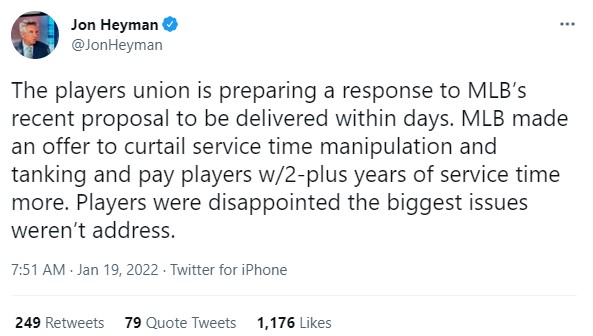 So gamers are resisting their biggest problems, but what are they? That’s a good list, but the main ones were that the MLB proposal did NOT address luxury tax thresholds or free agent eligibility at all, and the MLBPA expressed frustration with the current rules regarding both problems. Free agency and compensation (especially for arbitration-eligible leaguers and minor leaguers) is a hot topic. MLBPA would like to see free agency time cut from six to five years and the owners said no. The MLBPA is also asking for $100 million less in revenue sharing, which the owners say they don’t want to negotiate because it only increases the financial gap between big and small market teams.

And speaking of revenue, we all know how lucrative those TV deals are for owners. Ticket sales are good, but TV deals increase viewership and revenue. I’ll be the first to admit that I can’t catch that many games, so I’m relying on my mlb.tv subscription to get as much action as possible. Knowing this, the owners are interested in an expanded 14-team playoff bracket. Previously, the MLBPA was open to a 12-team format. It’s a big currency. 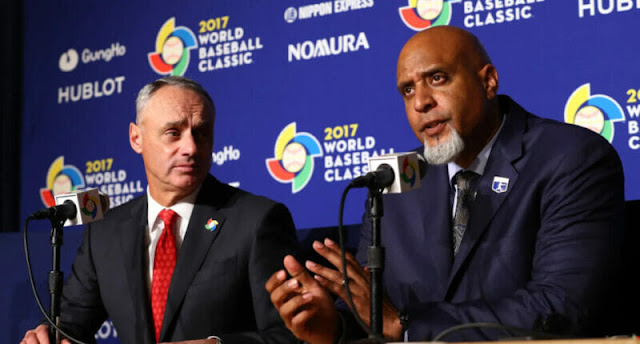 And what about that universal DH rumor? MLBPA is open to it and it’s still widely accepted that it’s part of this new CBA as long as it’s not something owners will try to use as leverage to get something else they want.

The clock is ticking no matter how we look at it. MLBPA is supposed to counter anytime now. Both sides need to start making progress here if we want spring training to start on time. I’m not convinced this is happening, but I hope I’m wrong. For spring training to start on time, both sides need to agree on something by the first week of February…which, honestly, sounds like a long shot.

Back to that MLB.tv subscription I mentioned…if I cancel auto-renewal on my mlb.tv, that will help things. But then again MANY others have to do the same to send the message. They would move if a bunch of TV revenue disappeared, wouldn’t they?