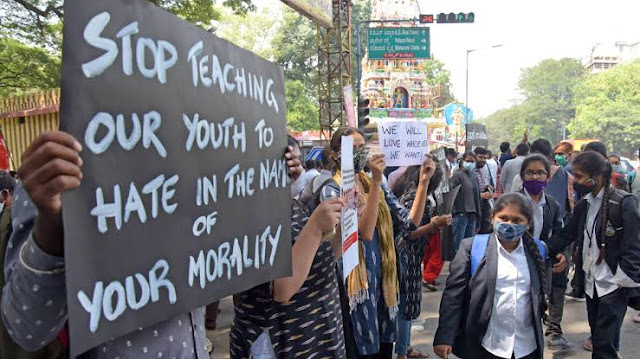 Many hatemongers continue to do so with impunity and have covered themselves with immunity. They know very well that they are only providing the regime in place with what they really want! There is, they are convinced, absolutely nothing in the machinery of public order that can ever touch them.
It is so obvious that there is no political will to stop the agenda of hatred which is being generalized in the country. On the contrary, all efforts are being made from the highest levels of power to stir up and foment hatred and division everywhere. They know it pays rich political dividends at election time! With polarization, majoritarianism naturally increases!
The fact that “hate crimes” are increasing in India is indisputable. “Hate crimes” are simply hostile and harmful crimes in their own way, when they target someone simply because of their disability, race or ethnic origin, religion or belief, orientation gender and their transgender identity.
We see this happening all the time in India today! The perpetrators are well known, the victims are obvious. It goes without saying that the targeting of minorities in India today is a well-planned political agenda in view of the 2024 general elections (and some of the state elections just before that).
This is especially the big project around 2025 where the Rashtriya Swayamsevak Sangh (RSS) will complete one hundred years of existence and in their dreams the establishment of a ‘Hindu Rashtra’ The writing is on the wall. The signs are ominous! Will the people of India rise up and rise to the challenge of preserving the rich pluralistic and democratic fabric of the nation?
The preparatory note for the April 24 consultation also specified:
“A nationally coordinated response from civil society to counter this is essential before hatred completely takes over our country. We must demand that the government operate in accordance with the constitution and we must demand accountability from the political and administrative apparatus and from the constitutional courts.
“is a call for all of us to come together and take to the streets to defend our constitution, to stand in solidarity with all who are oppressed and to say that we will not tolerate the targeted violence of Hindutva.
“Some of the ideas could be to have nationally coordinated protests on the same day, coordinated processes through which we express our solidarity with all those who have been hard hit by the violence and other actions. Above all, we we all have to discuss how we resist this together”.
A start is made!
Indian people would do well to learn from civil rights leader Martin Luther King who said, “Darkness cannot lead darkness; Light can do it. Hate cannot drive out hate; Love can do that.
Or another Nelson Mandela devotee who said, “No one is born hating another person because of the color of their skin, their background or their religion. People must learn to hate, and if they can learn to hate, they can be taught to love, for love comes more naturally to the human heart than its opposite”. Hate has never succeeded; only love triumphs. We must “end the hate and now!”
—
Human rights, peace and reconciliation activist/writer